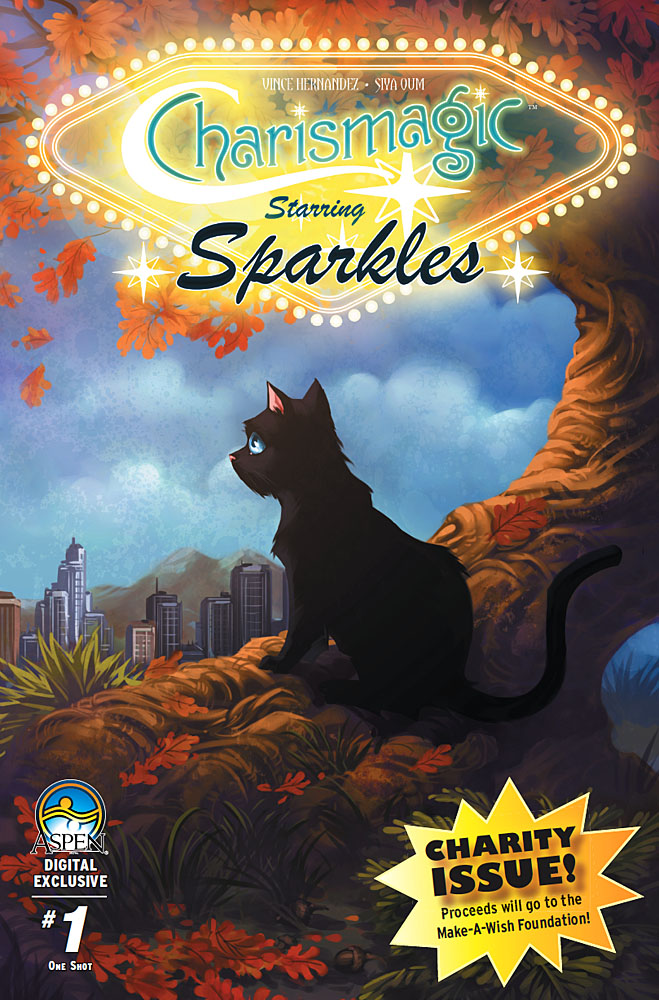 Aspen Comics is set to release Charismagic: Sparkles, a special Charity Issue Digital-Exclusive 11-page short story from the universe of their critically acclaimed, magical-adventure series Charismagic on November 21st . Aspen has also pledged to donate all of their proceeds for this issue to the Make-A-Wish Foundation.

“Our fans and new readers have been so overwhelmingly supportive of Charismagic and Aspen in general, so we wanted to give something back, and more specifically to those in need. We felt the Make-A-Wish Foundation was the perfect organization to help make this happen. Charismagic at its core is about heroic people overcoming great challenges and finding true courage in the face of adversity, and the Make-A-Wish Foundation adheres to these principles tenfold with their cause. It was a perfect fit for us. As well, artist Siya Oum is a hero in my book for taking on the entire project pro bono because she believed in the cause as much as we do. We really hope people will enjoy the magical yarn we’ve created.”

Charismagic: Sparkles will arrive exclusively on Comixology on November 21st, with a sale price of $0.99, and will also be available on the Iverse Comics App with a date to be announced shortly. For more information on the Make-A-Wish Foundation please check www.wish.org and for more information on Aspen Comics please see www.aspencomics.com and www.aspenstore.com.

Aspen MLT, Inc. is an entertainment publishing company founded in January 2003 by superstar comic artist Michael Turner. Priding itself on producing entertainment properties of the highest quality visual and storytelling elements Along with their own successful properties such as Fathom, Soulfire, Executive Assistant: Iris, Lady Mechanika, Charismagic and more. Aspen also collaborates with the comic industry’s most successful companies and endeavors including Marvel Comics and DC Entertainment. Aspen has collaborated with Marvel for various hit projects, including cover work for the best-selling events Civil War, World War Hulk, and Ultimatum. Aspen collaborated with DC Comics to provide covers for such best-selling titles as Superman/Batman: The Return of Supergirl, The Justice League of America, and Eisner-nominated covers for the critically acclaimed, best-selling Identity Crisis series. In 2006, Aspen joined forces with television giant NBC to create the online comic adaptations for the hit television series Heroes. Currently in 2012, Aspen is teaming up with Gale Anne Hurd’s Valhalla Entertainment to produce the horror-adventure series Dead Man’s Run, as well as collaborating with director McG’s Wonderland Sound and Vision to produce the horror comic Haunted City. Aspen also produces the one-of-a-kind Anarchy digital graphic novel for the popular body spray company, Axe.

The latest issue of IDW Publishing‘s Judge Dredd series is out this week in Judge Dredd: False Witness #3. After being framed for the murder of a high-profile citizen, Mathias Lincoln is now the most […]