The ground breaking iPhone comic ‘Clown Commandos’ is now into its 5th issue.

to get issue #5, just restart your Clown Commandos app and it will be their waiting! 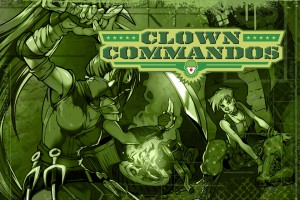 A new squad of heroes has marched into your worldâ€”Clown Commandos! From an alternate universe where clowns evolved into elite soldiers, these heroes must survive in a reality where clowns are known as bumbling buffoons. Here, the rubber nose is not a badge of honor. However, that’s all about to change.

Your tour of duty begins with the official Clown Commandos comic series! Created for the iPhone, iPod Touch, and iPad, this brand new adventure series features exclusive content, story-driven interface, and INTERACTIVE SOUND EFFECTS. Listen as the story comes alive with the tap of your finger!

WARNING: Those suffering from coulrophobia (fear of clowns) need not be afraid. Clown Commandos only strike fear in the hearts of bad guys!