Comics Alliance have an interesting essay on a way forward for digital comics: 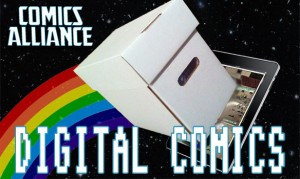 Why not switch the paradigm? Push collections of stories, rather than installments. Some people would like to keep up with a comic as it comes out, and there’s nothing wrong with that. But, off the top of your head, do you know anyone who doesn’t regularly read comics that would buy Batman #404 alone? Okay, now do you know people who would buyÂ Batman: Year One? Yes, right? #404 is just the first chapter ofÂ Year One. The only difference is that one is an issue, while the other is a full story.