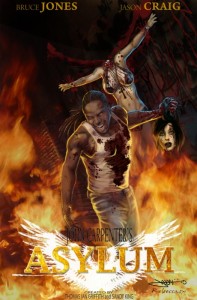 Thereâ€™s a war coming and the battle ground is the City of Angels. In tunnels beneath the city, in the dark alleys among the homelessâ€¦demons lurk and Lucifer bides his time. One man knows. One man sees. One man walks those dark streets.

John Carpenter – Halloween, Big Trouble in Little China, Escape From New York brings you a new comc – and its available on Graphicly! Above is a teaser to get you into it!