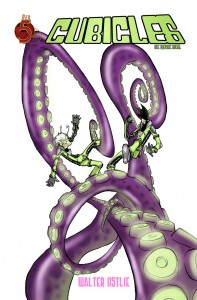 July 6, 2011. Calgary, AB — With a mandate to bring off-beat, fresh-talent, eclectic stories
of pure fun to the digital comic storefront, Red 5 Comicsâ€™ â€œDigital Firstâ€ line could find no
more perfect story than â€œCubicles: The Graphic Novelâ€ by writer / illustrator Walter Ostlie.
â€œCubiclesâ€ stars Wally and Ost — two ordinary guys with ordinary desk jobs, complete with
monotony, tension relief, horrible bosses and office crushes. But the pairâ€™s tedium is about
to be shattered by galactic pirates, savage aliens, and space squid all wanting to destroy
their company. Can Wally and Ost save the day? Get the girl? Maybe even get a raise?

â€œCubicles is a joy ride,â€ explains Ostlie. â€œEvery plot point was devised by asking, â€˜What
would be the most fun or crazy thing to do?â€™ It was great just to throw Wally and Ost into a
horrible situation and try to devise how two normal guys, with no special powers, would be
able to get out of it.â€

Early reviewers unanimously had a great time with â€œCubiclesâ€. Comics Should be Good says
Ostlie has â€œa good sense of humor and his comic delivery is strongâ€ with an â€œimpressive
art styleâ€. Comic Buzz gives the book a 9/10, and was â€œespecially fond of the tone of the
characters. As sardonic, slightly sarcastic dialogue goes the book pretty much nails it.â€ DC
author Caanan Grall â€œlaughed out loud quite a bitâ€.

[cincopa A0DArqKwB204]
â€œCubiclesâ€ is told in seven chapters, but the digital graphic novel collects the entire 84-page
story for just $3.99 — the price of some single comic issues. If that doesnâ€™t convince you,
the first chapter is available for free for a limited time.
â€œCubiclesâ€ debuts today and is available now on the web, iOS and Android devices through
comiXology (comic.comixology.com) digital platform. It will available this summer through
digital partners iVerse, Graphicly and Panelfly as well.

About Red 5 Comics
Red 5 Comics creates and produces cinematic-style comic book entertainment. It earned the
2007 Gem Award for Best New Publisher and its titles have been nominated for two Eisner
Awards and two Harvey Awards. It was founded by Paul Ens, former Director of Lucasfilmâ€™s
Lucas Online, and Scott Chitwood, co-founder of TheForce.net.
For updated information on Red 5 Comics and their titles, visit www.red5comics.com