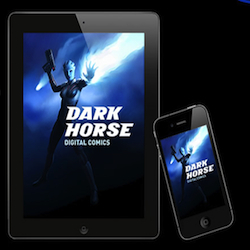 First of all, leading into the convention, Dark Horse will release a special three-part digital preview comic, showcasing eight pages of each of our new fall titles! Check out Tom Morelloâ€™s Orchid, P.Â C. Cast and Kristin Castâ€™s House of Night, and of course, Guillermo del Toro and Chuck Hoganâ€™s The Strain! This special preview comic will be available at Digital.DarkHorse.com on October 12.Â

If thatâ€™s not enough, we will be giving away t-shirts all weekend long â€œtaggedâ€ with additional chances to win Dark Horse digital store credit!Â