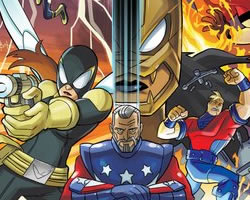 To absolutely no-oneâ€™s surprise, I keep circling around Archie Comicsâ€™ announcement of their revival of their Red Circle characters in something approaching a mix of confusion and awe. Thereâ€™s something there that seems compelling, but Iâ€™m not quite sure if I can work out what it is, just yet. Instead, Iâ€™m just thinking in bullet points.

One of the more odd parts about the digital subscription model announced in The New York Times piece was that each episode will be six-pages long. Presuming this wasnâ€™t some kind of misunderstanding, it seems amazingly short by todayâ€™s superhero audience standards, and makes me wonder how often weâ€™re going to get updates. Six pages is a fine length for something that gets updated weekly, but monthly, thatâ€™s going to seem like a problem. Especially when costs are being talked about in the $2.99 range (Presumably, thatâ€™s $2.99 per month).

Will it include the two different DC attempts to do something with the characters? Both Impact and the Red Circle had their good points (especially the Impact line, way back when), and itâ€™d be nice to see them being made permanently available somewhere.

And About The Stories Themselvesâ€¦

Iâ€™m kind of fascinated by the backstory presented in the NYT piece. Not necessarily the â€œitâ€™s all new superheroes who have to live up to their predecessorsâ€™ reputations!â€ part, because, well, that just makes sense as a narrative device to introduce new readers to a new world and give them someone to empathize with. But the â€œold heroes have been killed by the bad guysâ€ part of the whole dealâ€¦? That seems oddly tonedeaf for something thatâ€™s supposed to be similar to The Incredibles, to meâ€¦ The proof is in the execution, of course.

Overall, Iâ€™m curious enough â€“ and enough of a supporter of the idea, in theory â€“ to sign up for the launch. Whether what ends up being offered will keep me subscribing past the first taste, well, that remains to be seen. But as a first step in a new directionâ€¦? Color me optimistic.