Graphicly sure have been busy recently – now they are flexing their digital muscles to release Robert Kirkman’s series ‘The Walking Dead’ on the Barnes & Noble Nook and the Amazon App Store! 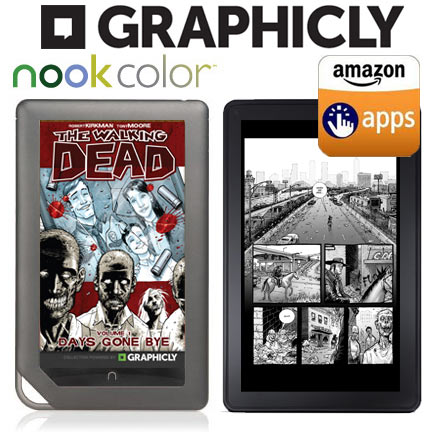 As we prepare for the return of the hit show, The Walking Dead (season 2 starts Sunday, October 16th), nowâ€™s a great time to catch up with the comic series that inspired the television show! Written by Robert Kirkman with art by Tony Moore and Charlie Adlard, The Walking Dead is a tale of survival horror in a world overrun by zombies and has been consistently one of the best-selling comics of past decade.

Now owners of the Barnes and Noble Nook Color and Android powered tablet users can experience The Walking Dead comics at the touch of their fingertips by downloading the collected edition apps of The Walking Dead direct to their device!

Android Tablet users canÂ find the apps here for purchase, or search the Android App Store Market on your device

Nowâ€™s the perfect time to set forth on the adventure of reading The Walking Dead, while you watch the new season of The Walking Dead television show on AMC! Â And you donâ€™t have to worry about spoilers, as the show, while based on the comic with many similarities is unique and a bit different than the comics. Â Plus, thereâ€™s 14 volumes of the comic to catch up on, so you can fill the time inbetween episodes!