This weekends Dark Horse Sale is Conan The Cimmerian! 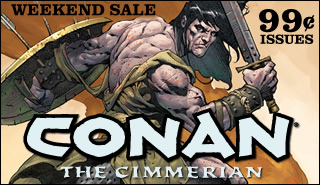 As hard as it’s been for Conan to return to Cimmeria, things aren’t getting any easier as he nears his goal, and he quickly runs afoul of raiders on the Cimmerian borderlands. One stranger welcomes Conan home with a crack to the head, and another begins to weave a tale about Conan’s grandfatherâ€”another Cimmerian who was filled with wanderlust.Â Conan the Cimmeriancontinues Dark Horse Comics’ modern revitalization of Robert E. Howard’s most beloved character. This is a great jumping-on point for new readers!