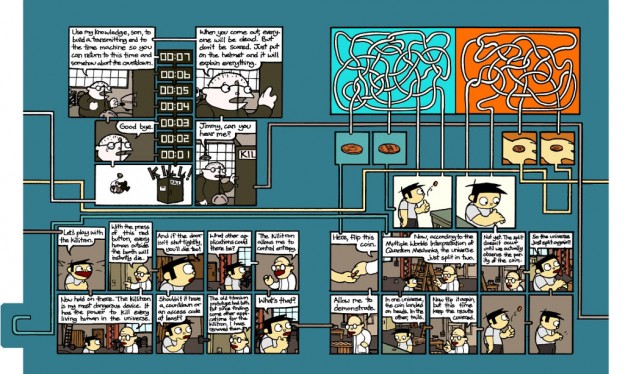 If there was ever a graphic novel that was ready-made for its own iPad app, it would have to be Jason Shigaâ€™s Meanwhile. The interactive â€œChoose Your Own Adventureâ€-like graphic novel came with tabs at the side of each page directing readers to choose the next step in the story â€” if they could avoid wiping out all of mankind in the process, of courses.

In this case it seems like turning the graphic novel into an app could actually make it easier to read, as the device does the work of keeping track of where you are in the story and, in theory, lets you move backward and forward to see the various plot points. So itâ€™s no surprise that Shiga has been working with interactive fiction writer Andrew Plotkin on a version for the various iOS devices.

â€œI picked up Meanwhile at PAX East in 2010 â€¦ I immediately fell in love with it â€” a thoughtful, beautifully-designed take on the Choose-Your-Own-Adventure genre,â€ Plotkin said on his blog. â€œWhen I got my iPad, I immediately said â€˜That. I have to do that. In peopleâ€™s hands. Interactively. It will happen.â€™â€

The Meanwhile app is due out this fall.