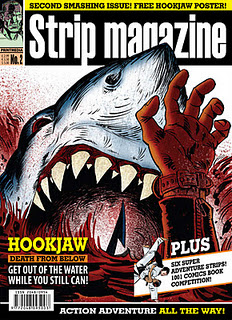 The iPad-only digital edition of STRIP Magazine #2 is now on sale from iTunes – again in advance of the print edition.

Due to a small but unexpected delivery delay from Bosnia, the print edition will not be on sale until 14th December, for which publishers Print Media Productions have apologized.

Featuring a cover by Rufus Dayglo the issue includes:

â€¢ Black Ops Xtreme Part 2, written by John Freeman and drawn by PJ Holden: the team are sent to South America to kill a dangerous terrorist!

â€¢ Age of Heroes Part 2 by James Hudnall and John Ridgway: the magician Wex battles for his life against deadly monsters!

â€¢ Recovery Inc. by Michael Penick and Dean Deckard: the company is hired to retrieve a top secret stolen prototype!

â€¢ The second winner of our ‘Strip Challenge’ – “The Citadel Codex”, set in ancient Mexico

â€¢ An exclusive interview with comic artist John McCrea, British comics news, a competition to win copies of Paul Gravett’s new book 1001 Comics You Must Read Before You Die and the new collection of Alan Grant and Arthur Ranson’s Mazeworld; and a sneak preview of Crucible, one of the new strips coming up next year STRIP Magazine.