IDW have now joined the ranks of Marvel and DC with a storefront on Comixology with all new apps too! 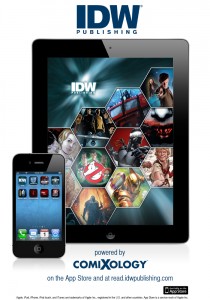 â€œPowering IDWâ€™s entire catalog across their bestselling apps is a privilege. The diversity of IDWâ€™s line offers something for everyone, whether youâ€™re a comic fan or not,â€ said comiXology co-founder and CEO David Steinberger. â€œWith the recent addition of Comics by comiXology pre-loaded on the Kindle Fire to our platform, IDW now has a fully cross-platform solution that can reach new fans.â€

As the first comics publisher to launch its own â€œin app purchaseâ€ storefronts for the Apple iPadâ„¢, iPhoneÂ® and iPod touchÂ®, IDW has long been a leader in the digital comics space â€”having their own IDW branded application along with introducing several unique apps catering to fans of particular titles. The IDW Comics app offers the complete digital catalog, while IDWâ€™s apps for special series like TRANSFORMERS Comics, G.I. JOE Comics, Star Trek Comics, True Blood Comics Collection and Doctor Who Comics and most recently 30 Days of Night Comics app offer those specific comics for those specific brands.Â  IDW also released the first creator-based app, Templesmith Comics, featuring the art and stories of Ben Templesmith.

In addition, IDW Publishing has committed to a full same day as print release schedule, a first for the company. All new digital comics will be offered at full cover price.

â€œIDW has always been dedicated to making our comics and graphic novels as accessible as possible on as many platforms as possible, and this deeper IDW-comiXology relationship continues that commitment,â€ said IDW CEO and Publisher Ted Adams. â€œWe are strong believers that digital comics expand the reach of these books and consistently bring new readers into the industry.â€

This past October, during the New York Comic Con, IDW Publishing and comiXology announced that IDWâ€™s library would be coming to the Comics by comiXology platform. Todayâ€™s announcement marks a new chapter in the relationship between both companies.

The addition last month of IDW Publishing titles to the Comics by comiXology helped lift comiXologyâ€™s same-day-as-print offering over the 50% threshold, signaling a sea change in the comic book publishing landscape and making Comics by comiXology the destination for all consumers wanting to discover and read the latest and greatest comic books in digital format.

All comiXology platforms feature the companyâ€™s Guided Viewâ„¢ Technology, enabling the reader to transition smoothly between different comic panels, mimicking the reading experience of a traditional print comic book. Purchases of comics through the IDW apps or the Comics by comiXology app will be available to read across top platforms and devices, including AppleÂ® iOS, Android and the Kindle Fire, or on the Web at read.idwpublishing.com or comixology.com.

About comiXology
Since 2007 comiXology has been developing the technological infrastructure to bring comics into the digital mainstream and expose new audiences to the rich history and culture of the industry. Through partnerships with top comic book publishers including Archaia Entertainment, BOOM! Studios, DC Comics, Dynamite Entertainment, IDW Publishing, Image Comics and Marvel Comics as well as their own mobile and web apps which host over 16,000 digital titles, comiXology has become a leader in digital comic book proliferation. Also focused on creating strong ties with retail stores through its technology solutions, comiXology continues to transform the previously fragmented comic ecosystem into a vibrant and cohesive marketplace.

About IDW Publishing
IDW is an award-winning publisher of comic books, graphic novels and trade paperbacks, based in San Diego, California. Renowned for its diverse catalog of licensed and independent titles, IDW publishes some of the most successful and popular titles in the industry, including: Hasbroâ€™sÂ The TRANSFORMERSÂ andÂ G.I. JOE,Â Paramountâ€™sÂ Star Trek;Â HBOâ€™sÂ True Blood; the BBCâ€™sÂ DOCTOR WHO; Tohoâ€™sÂ Godzilla; and comics and trade collections based on novels by worldwide bestselling author, James Patterson. IDW is also home to the Library of American Comics imprint, which publishes classic comic reprints; Yoe! Books, a partnership with Yoe! Studio.

More information about the company can be found atÂ IDWPublishing.com.