Have I mentioned that I really enjoy Atomic Robo? 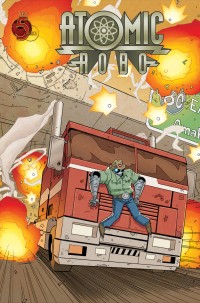 Story: “Atomic Robo and the Ghost of Station X”

Previously: Robo tried to save some astronauts in space. And then it went HORRIBLY WRONG. So, then Robo tried to get to the bottom of it only to find a big damn conspiracy with tanks and guns and stuff. This issue? He’s on the run and the fate of everyone in the world lay in the hands of a trucker and some HAM radio hobbyists. Seriously. Not buying ATOMIC ROBO comics is the biggest mistake of your life. Do something right for a change and pick up an issue. Start with this one if you have to. Your only regret will be lamenting what took you so long.

Really – Atomic Robo goes from strength to strength. With humour, science and action in this issue, you really need to catch up fast – everything is leading up to the big reveal – whatever that may be.

Because, personally, I have no idea what is going to happen next.

This is a GOOD THING – I now am patiently waiting for the next issue.

This is excellent story telling – each new mini from the AR team brings something new, it may be from the past, future or present. There are some excellent ideas, with some fun art and nice touches!

“I get RSS feeds in my head”

With a well rounded and fleshed out supporting cast Atomic Robo is not a one trick character or storyline. There are layers here!

Atomic Robo is Red 5’s marquee character and needs to be read by all!