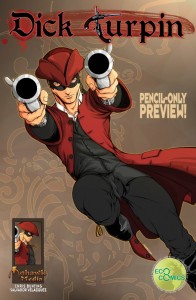 Written by Chris Bunting and with art by Salvador VelÃ¡zquez, this comic follows the exploits of historical highwayman, Dick Turpin who, despite being executed on the first page is a resourceful enough hero to escape even from the clutches of death.

This review is based upon a pencil-only preview, but from what has been seen, the line work of the art is controlled and well thought out. The storytelling is effective and character emotions are easily read. Sometimes the figures seemed to be a little off-model, but nothing immediately distracting. Of course, the main strength of the artwork is when the story calls for drama. There are some exciting action scenes, which play to the artistâ€™s strengths, but the real winner is the striking first page. The character designs are also quite nice, with the titular Dick Turpin wearing some pretty stylish duds.

The writing itself blends very well with the art and certainly feels like there is a strong working team behind this book. The story itself can fall into the typical masked hero/Robin hood fare, albeit with a few twists, but itâ€™s the kind of story you canâ€™t help get caught up in. The story can at times feel a little rushed in trying to get a lot of key points out of the way in the first issue, but thereâ€™s nothing too overtly overwhelming. Despite this, this was still an enjoyable read and the ending cliff-hanger certainly makes one interested in what happens next.

â€˜Dick Turpinâ€™ is published by Mohawk Media and is available on Graphicly.