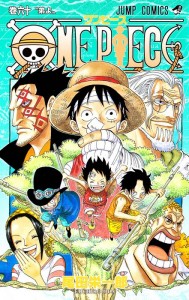 A good time to be a â€˜One Pieceâ€™ fan, as not only has volume 59 been released in English both digitally and in print this week, but digital versions of 61 and 62 are scheduled to be released next week. Noted by Digital River as a move to combat internet piracy and bring the English releases in line with the Japanese production, this is a big step for Viz and the western manga market.

And for those who are not nautically inclined, Viz Mediahas also been doing similar digital programs for popular titles â€˜Narutoâ€™ and â€˜Bleachâ€™. With the sheer length of both these series, Viz appears to be handling the digital aspect of the company well, and it will be interesting to see where they go.