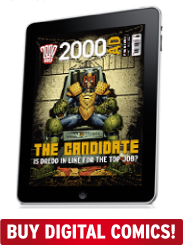 Fresh off the news that Image Comics have started to release DRM Free digital comics – and that 15% of their sales are digital.

2000AD have also an average of 15% of their sales being digital now – and, over the last 18 months their print sales and subscriptions have increased to a higher level that they have been in years!

I would say that there are a couple of points to take from all this.

First it looks as if, as far as 2000AD are concerned, that digital is not having a detrimental effect on print sales – in fact print sales have risen. Now this may or may not be the added benefit of the choice of digital subscriptions on the Newsstand app on the iPad, the collections of trades and graphic novels on iTunes and Kindle stores, but these readers may be interested enough to move onto print copies!

It’s also good to see the percentage of digital sales have increased, without effecting the print – I’m not a print hater, so have no wish to see it go away, so it shows that they can co-exist.

Finally it shows that these two mediums can exist in a strong market, as the buyers are usually different types of people – print or digital – and increasing the two, rather than concentrating on one can only be a good thing!