So, fresh out the box, Uproar Comics have their first D.E.C title available! 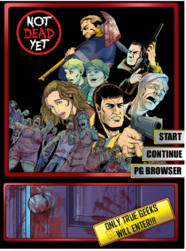 “Not Dead Yet”: First title released on the D.E.C.!

“Not Dead Yet” is the debut  title of Uproar Comics latest venture:      The Digital Experience Comic Series .
The D.E.C Version 1.0 launches today and within the first installment of “Not Dead Yet” contains 8 post-apocalyptic stories totaling 93 pages of animated awesomeness! Plus 5 unlockable characters bios with back stories, audio tracks and more!
For only £1.99 this is a digital product you’ll feel good about!!

“Not Dead Yet”  is an animated, interactive, motion comic incarnation of the Multi-Award Winning Comic series “Zombies Hi “. And When we imagined comics moving before your eyes, the added dimension of Sound and a host of collectable and unlockable features, we knew we had to make “Not Dead Yet“.

Digital comics has been a rising medium and one which we here at Uproar HQ are moving forwards in leaps and bounds. The Uproar Comics team is dedicated to ushering a new age of limitless storytelling possibilities. Take a look at our Pilot Projects below for more info on how you could shape the future of digital comics.
Available from the iTunes AppStore NOW!