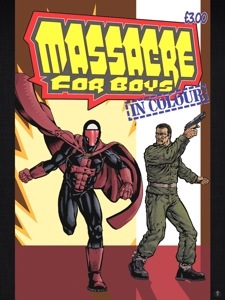 Massacre for Boys is another print/digital offering from the team behind the action special I reviewed a little while ago.
What we get is over 30 pages of a mixture of stories covering a good wartime and mystery genre (sometimes mixed together!) 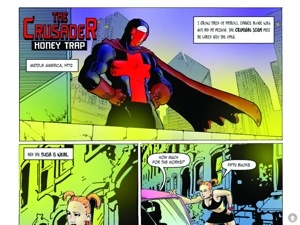 We kick of with Captain Tired in a mission of mercy to collect the body of a fallen comrade – called Walking Wounded: Night of the Big Heat It’s got a nice build up and some good action set in a tight location. The bait and switch finish was fun, as was the ending!
Next up we get The Crusader: Honey Trap . It’s fun to see a hero in the 1970’s who is’t whiter than white! He’s also not that good – as we’ve seen him get a kicking before! It’s a fun concept which is growing on me!
As a change of pace we get a mystery set in prose form from The Diogenes Club it’s a good slow down and well written and I would like to see more of these in small doses!
Jimmy Baker: Animal Hatmaker in Three Lions is a really funny concept, and seems to be getting crazier! The art is really detailed and is easy on the eye. Once you buy into the concept it’s a good fun read!
Bosher’s Goals: Hands on the Trophy is Striker mixed with gangsters! You get some good on-pitch action, mixed in with a parody of the east London gangster scene of the 60’s!
Badlands Rules is a more SciFi futuristic take, that gives us a Western feel. The outlaws and the marshals are there, but there’s the little extra!
To finish off there is another story of Captain Tired which add humour with the action of a WWII story – this is a good character and enjoyable to read!

Available in print and in digital here!