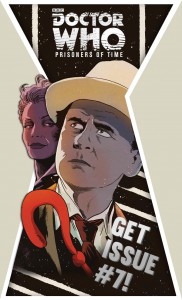 IDW have released this weeks digital comics including Doctor Who: Prisoners of Time #7

Doctor Who: Prisoners of Time #7
The Seventh Doctor takes the spotlight this issue, with stalwart companion Ace along for the adventure! The TARDIS has brought the duo to 19th-century Scotland, where the lord and lady of a manor have fallen into a comatose state, continuing to hide a dark secret… Mmm, I wonder… aha! It is the Sixth Doctor, and he’s brought Peri and Frobisher along for the ride! Featuring art by John Ridgway, the most celebrated Who artist this side of Dave Gibbons!

The other digital comics available are: