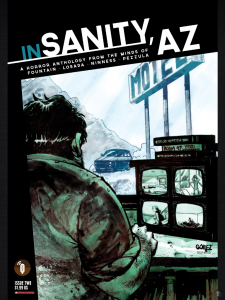 Once again combining the horror and humour – in Sanity, AZ #2 does not dissapoint – first I must state that, because of this, I may never look at children playing ‘police’ again!

Again, here we get over 60 pages of differing stories – all set in the same, ‘sleepy’ town of Sanity, AZ!

10 stories for a digital comic is excellent, and there is a lot to get through! 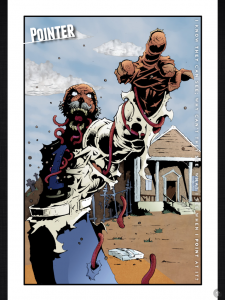 Kicking off with Ham Tickle we see the reason for my previous statement about kids. This story gives us some ups and downs and just when you think it’s ended, you get a twist at the end of the tale!

The Motel in Sanity isn’t as grim, but still is disturbing – giving us some visitors to the town in a twisted Bates Motel type! The final page sized panel gives you the grim grin that you get with these stories!

Lords Name is a silent story, which doesn’t need words – Sanity has it’s own enforcer for the common good and this is it! Smoothly scripted and a nice read!

Raw is a lot more adult and ties in with the crime and punishment theme of the stories – there’s some ‘adult action’ as well as violence – this is the sort of story which makes it adults only!The art is excellent and I enjoyed the pacing!

In Broken Water II we get some more from the previous issue. There’s some talking heads here, but again it’s well written and doesn’t let you drift off – because it grabs you well!

Cuckoo Clocks is possibly the weakest story in the book – but one had to be! It’s quite a fast read and can be re-read well. The art and the panel layouts were fun though!

Covet shows us that not even the residents are immune from punishment – a short story which ends as expected,

Lollipops is my favourite – by this point you know something isn’t quite right and it’s not going to end well, but the twisted ending gives a satisfying conclusion!

Finally in Sabbath we see that it’s not just humans causing problems in Sanity! Silly kitty!