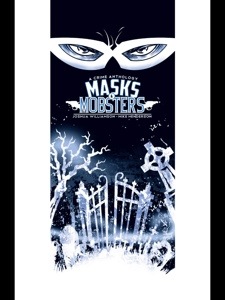 It seems like this series has absolutely flown by – one of the earliest Monkeybrain titles and we’re at issue #10
This is another fun(ish), easy to read issue, which again takes some of the tropes you expect – this time from the ‘mask’ genre and revolves it to face the mobsters.
This time round we get a group of sidekicks – a cross between the Teen Titans and Mystery Inc I would say! The mobsters on the other hand are participating in some grave robbing!
There’s some good cheesy action, which are a lot of fun – especially if you’ve been reading DC Comics’ Batman 66 – then it takes a darker tone, with the graverobbing, mobsters and Zombies! There’s a heel turn and some great dialog too!

The art continues to be perfect for this series, each character is well distinguished and the action scenes are well done. This is a series which is easy to jump onto if you are a new reader and hard to get off when you’ve started. It deserves to be one of Monkeybrains longest running series.