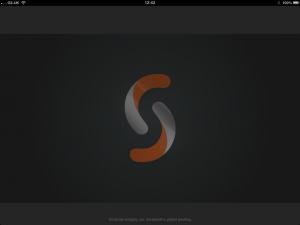 I’ve discussed Scrollon before, spotlighted it and had “10 Questions With” the app creator Doug Lefler now it’s time to look through the comics themselves. Kicking off with the free issue – Ashfire Moon 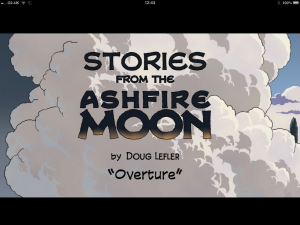 Harmon Travis is stranded. He is very far from home, and the girl he left behind, and any hopes of returning to them depend on his ability to appease the monsters of the night. 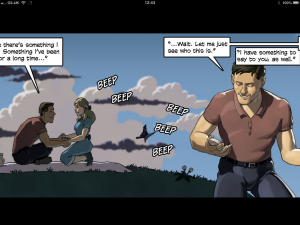 Starting off quite serene, we get a look at Harmon Travis and his feelings and his thoughts – although we only understand that afterwards. Jerked back into reality, he is in a crashing ship and forced to ditch on an alien moon. Joined by a robot dog he sets off to explore. As a ‘taster’ story it’s pretty heavy, but the story takes full advantage of the fact that it doesn’t need to worry about page counts and the like to make everything fit. 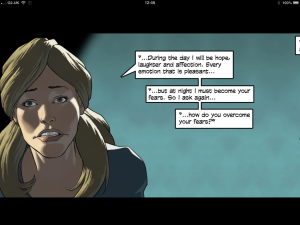 The art works well here, flipping from light to dark neatly and allowing the smooth scrolling to take charge of the pace. There are a few distinct changes of tone here within the story and the art does well to match between them – I’ve tried to show the transitions between the scroll above.

In all, as a taster it’s very good – it gives you a nice feel of the app, and what to expect. In fact, I would like to hope that there are more from Ashfire  Moon as short one-shot stories….