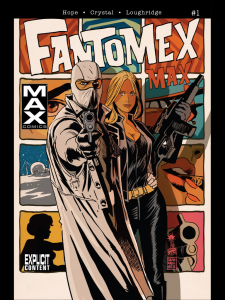 He’s the enigmatic mutant thief, identity unknown. Discover secrets of Fantomex’s past, which will (maybe) answer all your burning questions. This is Fantomex MAX. No holds-barred, sexy good times, and questionable French accents.

I would have thought that Fantomex – more than any of the others of the X-Verse – was best suited for the MAX treatment (with the exception of Wisdom, which I really enjoyed) and I must say I was dissapointed with this issue. Most of the MAX titles seem to be going the puply-adult route, which I have no problem with some doing this, but when it becomes the norm I disagree. Punisher MAX was excellent as was the following PunisherMAX.

Nevertheless, I intend to give this a chance, as it did seem to have some good points – and I like Fantomex. The most interesting part was the foils to Fantomex, who seem to be fun and have some good points going for them, I look forward to seeing their reactions! This is only a mini, so I hope things move at a faster pace than this issue….