The sequel to the excellent Dredd is available in comic form with Dredd: Underbelly, and it’s excellent! 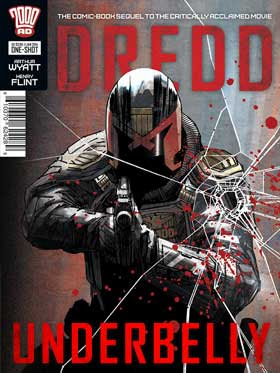 The one-shot comic book sequel to the critically acclaimed movie. In the wake of Ma-Ma’s death, other criminal gangs in Mega-City One are moving into the power vacuum, trying to fill the gap in the market left by the Slo-Mo drug. When a corpse dump is discovered in a rad-pit, the bodies are all revealed to be mutants. Could the dead be connected with an outfit smuggling illegal refugees into the city from the Cursed Earth? Judge Dredd once again teams up with Psi-Judge Anderson as they scour the underworld for the perps responsible, and bring them to justice!One shot. 32 pages!

You can buy copies from your local comic book store or go digital on Kindle Fire, iPad, Nook, and allAndroid devices through the 2000 AD webshop!

Read the free preview of this one-off special, written by Arthur Wyatt and drawn by Henry Flint. You ready, rookie?

From Markus Pattern is the latest issue of 13 Shots Of Whiskey is now available. The small town of St Giles is bedeviled by the Burnt Ends killer, but is he responsible for the death […]