IDW Publishing have released this weeks digital comics available online on iOS and Android. The spotlight this week is Transformers: More Than Meets the Eye #26 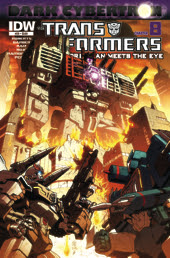 Transformers: More Than Meets the Eye #26

In this issue of Transformers: More Than Meets The Eye, things get dire — Autobots and Decepticons alike try in vain to stop Shockwave’s rampaging Necrotitan, as the crew of the Lost Light fights against the clock to revive a dying Metroplex! Dark Cybertron continues and a stunning new character makes her debut in Transformers: More Than Meets The Eye #26!