The spotlight this week is Rogue Trooper #1 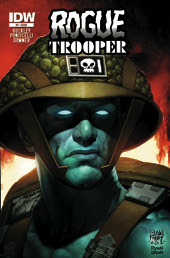 Acclaimed fantasy novelist, Brian Ruckley, brings his dark sensibilities to the realm of science-fiction in this re-imagining of the fan-favorite 2000 AD character. His collaborator Alberto Ponticelli breathes new life into this galaxy-wide war with stunning visuals that could only be captured on the comics page. War may be hell, but this book is pure heaven!