The spotlight this week is Samurai Jack #6 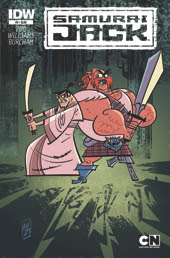 The Scotsman returns… but not how you’d expect! With his burly body transformed into a ladylike figure, he seeks the help of Samurai Jack to confront the villains that cursed him. But these foes may prove more formidable than the typical adversary. ‘Tis a jaunty-flaunty jig that begins in Samurai Jack #6!

This penultimate issue of this brilliant series is here, this is Teenage Mutant Ninja Turtles: The Last Ronin #4 from IDW Publishing. With a few key allies, the Ronin takes on the greatest risk yet […]

The second part to this current story arc from IDW Publishing, this is Transformers #35. “Sea of Rust,” part two! Termagax has many secrets–information that could forever tip the scales in the favor of the […]