IDW Publishing have released this weeks digital comics online, on iOS or Android. The spotlight this week is Rogue Trooper #2 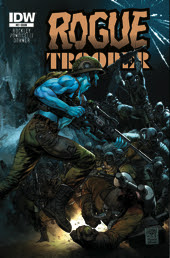 The cloned warrior known as Rogue Trooper is determined to bring to justice those responsible for the massacre of his brethren. Meanwhile, Rogue’s creators are just as determined to regain possession of the sole survivor of their super-soldier program. And Strongpoint Charlie stands in the way of both getting what they want…