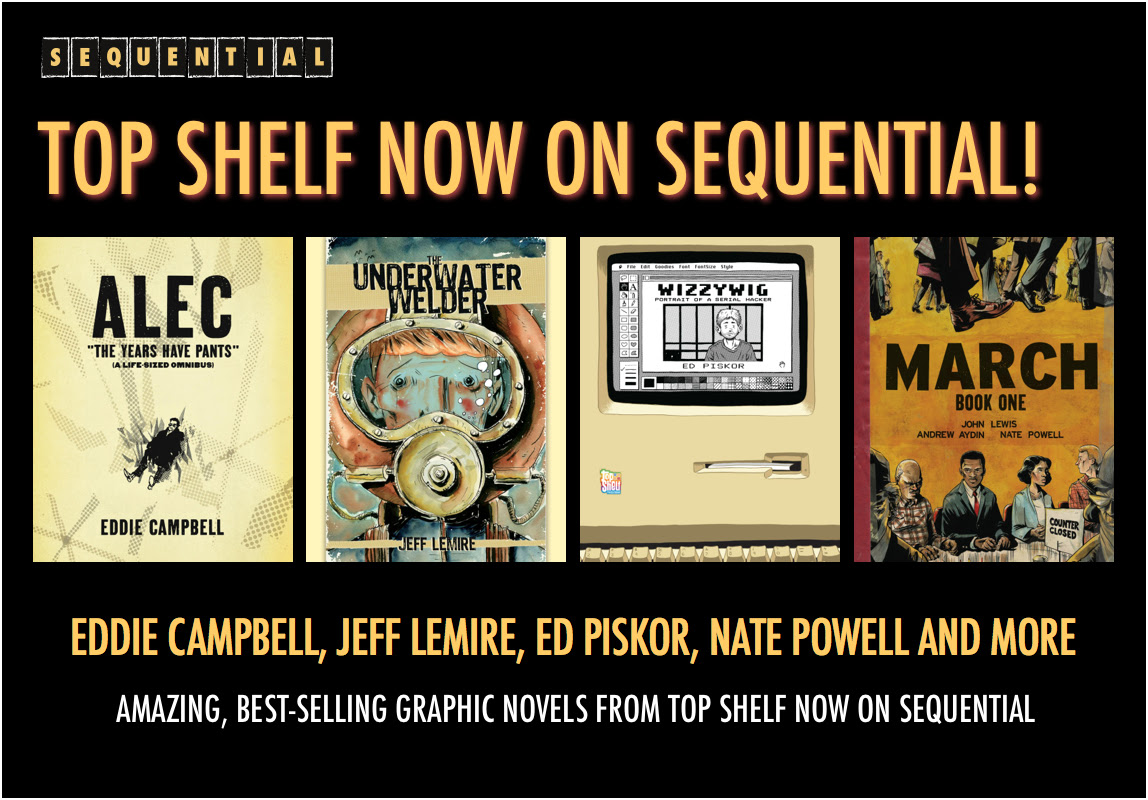 SEQUENTIAL, the graphic novel storefront and reader app focused on literary graphic novels, has announced that it has started releasing titles by pioneering art comics and graphic novel publisher Top Shelf. Titles now available on SEQUENTIAL from Top Shelf include:

These Top Shelf titles have been released as part of SEQUENTIAL’s expanded catalogue which now includes US publishers such as Fantagraphics, NBM and Secret Acres.

Top Shelf director of digital Chris Ross said, “SEQUENTIAL’s aim to curate a quality selection of literary graphic novels and try to reach a general audience is one we share; we’re delighted to have our titles available on their app.”

Released in August 2013, SEQUENTIAL is focused on book format art comics and literary graphic novels. It aims to help promote comics as an art form and has been offering titles from Fantagraphics, NBM, Secret Acres, Jonathan Cape, Knockabout, Myriad Editions, SelfMadeHero and Blank Slate Books amongst others.

SEQUENTIAL founder Russell Willis said, “We are thrilled to be able to add these Top Shelf titles to the app and will be adding even more shortly. Top Shelf is one of the most important players in the world and has played a significant part in expanding the horizons of the form. It publishes the best writers and artists the form has to offer.”

For more information on SEQUENTIAL and to download it for free from the App Store visit:

A new Belle one-shot this week from Zenescope Entertainment with Belle fighting the Sirens from mythology. Belle’s life has been non-stop with all that the supernatural corner of her world has been throwing at her […]

It’s #NCBD, and here are the latest digital comics for the week of 2nd June 2021 Unless otherwise linked, all comics shown here can be found on Amazon/ComiXology. If you buy on Amazon, you will also be […]