Asking “Are you ready for demonic irrigation” kicks of a new label for Comixology Submit with legendary Pat Mills!

Doctor Morbus, the PsychoKiller, will see you now.

I’m delighted to announce my first leap into the world of digital comics – courtesy of Comixology Submit – by bringing you PsychoKiller, a black-comedy tale of demonic possession, richly rendered in exquisite, eye-popping lurid colour by the fabulous Dave Kendall. 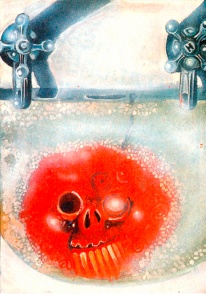 Written by myself and Tony Skinner, PsychoKiller first appeared in Toxic! a British weekly comic, in March 1991.  The comic was the brainchild of a group of British creators: myself (Marshal Law), Kevin O’Neill (Marshal Law and League of Extraordinary Gentlemen), John Wagner (Judge Dredd) and Alan Grant (Batman).  It was a brilliant opportunity to try out new concepts and new artists and PsychoKiller was one of the very best stories to feature in it.  Dave Kendall is without doubt one of the finest horror artists in the business and here you see his debut strip that is grotesque, horrifying, funny and… strangely beautiful.

We should have collected this story years ago, but – because it is relatively short at 56 pages – somehow we never got around it.  Now, with the advent of digital comics, it seems the perfect story to kick off the Millsverse: a collection of my stories on themes and in styles that are sometimes outside today’s increasingly narrow comic tramlines.

Toxic! was aimed at a popular culture audience, at the ‘reader in the street’, rather than hardcore comic fans.  I’m really passionate about reaching this audience, especially as it has been lost in recent years in favor of more elite, older or superhero readers.  In other words, I like to think you could download PsychoKiller and enjoy it, even if you rarely pick up a comic book.  It’s the comic equivalent of watching a black comedy horror film, likeShaun of the Dead, something that there just isn’t enough of out there.  Horror – yes.  Comedy – no.

Doctor Morbus is a great character with his dark British sense of humour.  He probably owes a little to my years of writing Doctor Who (Iron Legion and others with Dave Gibbons); and there’s something about eccentric Brits that’s always appealed to me, from Sherlock Holmes onwards.  It also owes a great deal to my writing partner Tony Skinner, who is an enthusiastic aficionado of all things schlock, from Friday the Thirteenth to Tarantino. I still have fond memories of our writing this together and laughing our heads off at the Doctor’s scary bedside manner and disturbing courses of treatment.

PsychoKiller is now available to download from the Millsverse on Comixology. Please do check it out – I’d love to hear what you think of it – and who knows? We may bring Doctor Morbus back to continue his rounds on the psycho-ward, conducting bizarre exorcisms and releasing his seriously disturbed patients from their demonic infestations. 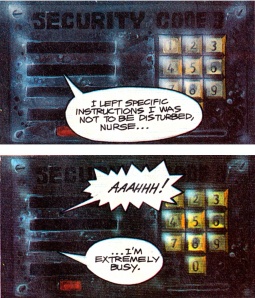 More stories are in the pipeline for Millsverse on Comixology Submit, so if you enjoy PsychoKiller, look out for future announcements!

Globalcomix has recently updated their reader for online reading of digital comics. Now they have added a new aspect to the reading experience. As a service to both creators and readers, we are dedicated to […]

From Ablaze Publishing this new comic is part of their new releases by Maria Llovet. The first one is Porcelain #1 and is out now. Check out my preview here. Stuck inside an ever-changing mystery […]

It’s #NCBD, and here are the latest digital comics for the week of 4th August 2021 Unless otherwise linked, all comics shown here can be found on Amazon/ComiXology. If you buy on Amazon, you will also be able […]