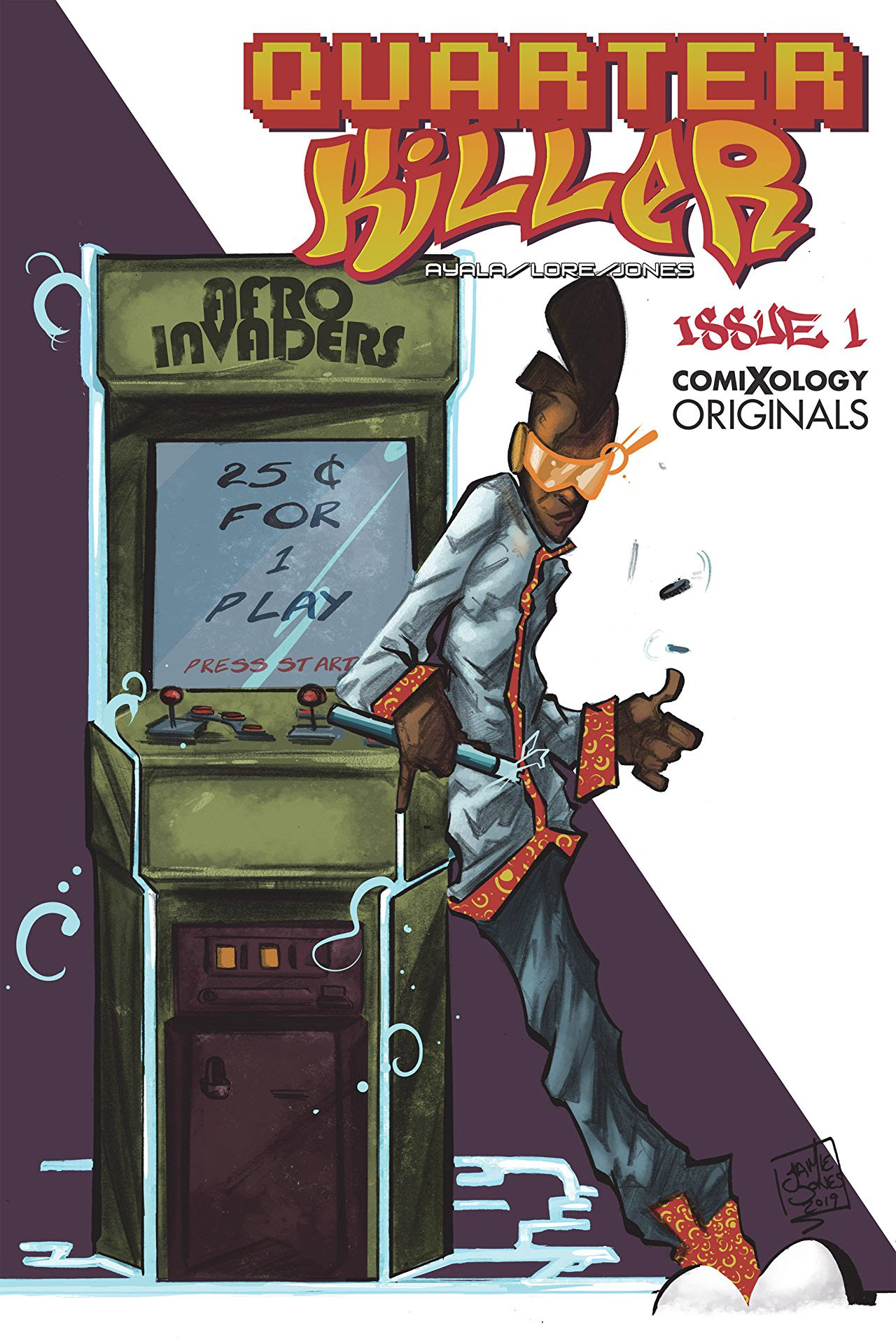 September 23, 2019 – New York, NY – ComiXology, Amazon’s premier digital comics service, announces Quarter Killer, an all-new, creator-owned mini-series from co-writers Vita Ayala and Danny Lore, with art by Jamie Jones, and lettering by Ryan Ferrier. An action-packed, cyberpunk 5-issue comic series, Quarter Killer #1 is part of the comiXology Originals line of exclusive content and will debut on September 25th. It will be available to read at no additional cost for Amazon Prime, Kindle Unlimited, and comiXology Unlimited members, and also available for purchase on Kindle and comiXology.

Meet Quentin Kidd AKA QK, an ex-corporate computer hacker who offers their services to those willing to pay them with old skool currency, specifically quarters, because quarters are untraceable. QK only has two rules: they don’t work for criminals or police, and no killing.

“Quarter Killer started with the concept of Robin Hood in the hood, but cyberpunk and brown,” said co-writer, Vita Ayala. “When not working, QK tends to help solve problems around the hood, and help their friends keep out of trouble.”

Vita Ayala has emerged as a rising star of the comic book industry with projects including The Wilds, Submerged, and Livewire. Quarter Killer marks Vita’s latest collaboration with Danny Lore, Ayala’s James Bond co-writer and the writer of the acclaimed Queen of Bad Dreams.

“We are inhabiting a world which is all about Queer Brown Cool, and creating cyberpunk and Afrofuturistic worlds full of fun and energy,” said co-writer, Danny Lore. “Jamie Jones was a natural fit to illustrate Quarter Killer. Jamie has developed a fun, rich, energetic world. His art reflects the cyberfunk hustle and flow of these characters, for pages that never feel stale or forced.”

Both Ayala and Lore previously collaborated with Jones on separate stories of The Whisperer.  “I met Vita at Emerald City Comic Con,” said artist, Jamie Jones. “We hit it off and they told me about this super cool comic called Quarter Killer that they wanted to make with their friend, Danny. And I went home and did some sketches and then we were dead set on making this comic.”

“The major themes in Quarter Killer are related to community, identity, and morality,” said co-writer Vita Ayala. “Quarter Killer is about being more than what people have decided you are, about choosing your family, and living by your own code.”

About the Creators:
Vita Ayala is a queer Afro-Latinx writer out of New York City, where they live with their wife and cat sons. They have written for Black Mask Studios, DC (comics), Dark Horse, Dynamite, IDW, Image, Marvel, Valiant Comics, and Vault Comics. They will be writing Dynamite’s James Bond in December 2019 alongside Danny. They’re non-stop, like Hamilton!

Danny Lore (they/them) is a queer black writer/editor from Harlem and the Bronx. Most of their writing is contemporary speculative fiction. They’ve had their short fiction published by FIYAH, Podcastle, Nightlight, EFNIKS.com and more. They’re also the editor for The Good Fight and The Wilds (w: Vita Ayala, a: Emily Pearson, c: Marissa Louise, l: Jim Campbell). They are an acquiring editor for FIYAH Magazine. Their first creator-owned comic series, Queen of Bad Dreams (a: Jordi Perez, c: Dearbhla Kelly, l: Kim McLean) is out now. They will be writing Dynamite’s James Bond in December 2019 alongside Vita. They’ve got an apartment full of video games, makeup, and fountain pens.

Jamie Jones is an American cartoonist living in Saint Petersburg, FL. He is the artist of several comics projects including Kicking Ice, Dodger, Joey Ryan: Big in Japan, and A Constant Distraction, Puerto Rico Strong, as well as the creator of the anthology project, The Whisper and the pulp action comic, The Baboon.

Ryan Ferrier is a Canadian writer and letterer, thrilled to be a part of the incredible Quarter Killer team.

From The Treasury Of British Comics is a new collection of Karl The Viking. This is the first collection of this classic series. CREATIVE TEAM: Ken Bulmer (w) Don Lawrence (a) RELEASE DATE: 19 January […]