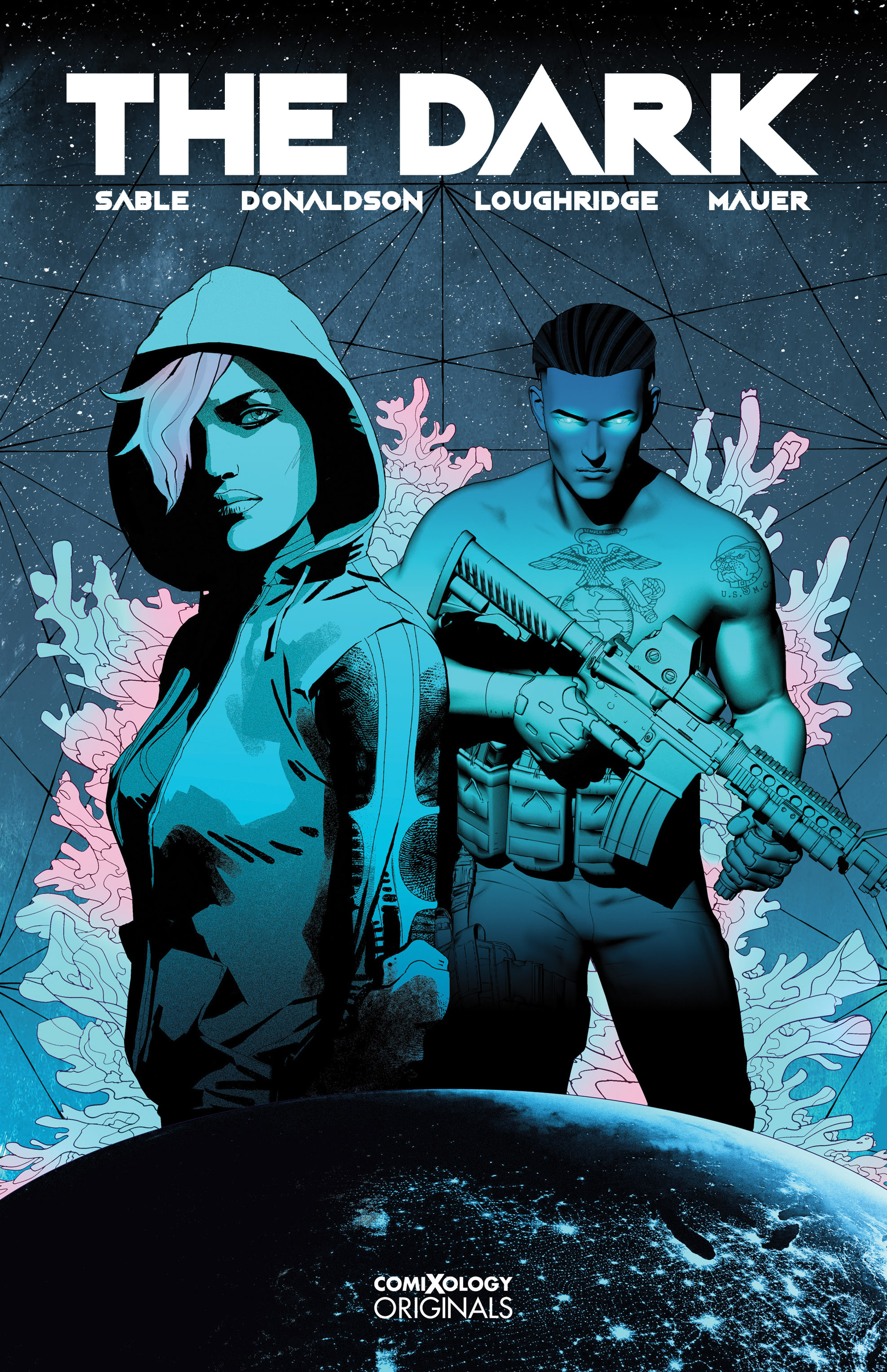 Available from comiXology Originals on October 2, 2019

October 2, 2019 – New York, NY— Today, ComiXology, Amazon’s premier digital comics service, debuted the original graphic novel The Dark – written by Mark Sable, with art by Kristian Donaldson, colors by Lee Loughridge, letters by Thomas Mauer, and edited by Will Dennis, with consultant Mey Rude. The Dark is set in the year 2045 after a worldwide cyberwar ends technology as we know it. The Dark original graphic novel is available to read now at no additional cost for Amazon Prime, Kindle Unlimited, and comiXology Unlimited members, and is available for purchase on Kindle and comiXology.

The Dark features two unforgettable protagonists: a U.S. marine whose eyes were destroyed in combat and healed using advanced biotech, allowing him to return to the field on a dangerous retrieval mission, and an intelligence operative turned spy, who is a trans woman seeking to further her transition using cutting edge – and stolen – biotech. They’ll travel across a world which has been rocked by a terrorist tech plague and mass blackouts to uncover a conspiracy that could change all of humanity.

The Dark was initially inspired by the work writer Mark Sable’s work with The Atlantic Council’s Art of The Future program, where he helps the military, intelligence and scientific communities envision the future of conflict. “The Art of the Future puts writers, filmmakers, game designers and other creatives together with military and intelligence officials and scientists to help envision the future for policy makers,” said writer Mark Sable. “While participating in brainstorming sessions with this think tank, two of the greatest concerns for the near-future were cyberwarfare and unchecked bio-technology. I first wrote The Dark as a short story and when I saw Kristian Donaldson’s new computer rendered artwork, I knew we needed to tell this story together as a graphic novel.”

Kristian Donaldson’s art process for The Dark is both unique and immersive. All the characters are painstakingly posed 3-D assets, and every object, vehicle, weapon, building, and city, is fully modeled using 3-D software. “It’s the equivalent of shooting a film and having all your sets built out, and all your actors in costume. Every building, every room, every chair, gun, car, and helicopter has been sourced and built and put together to make ‘shots’ with a free camera in virtual space,” says artist Kristian Donaldson. “There have been other books using 3-D but none quite like this by a single artist. I assembled a stable of 3-D assets for over 5 years now before drawing a single page.”

“Mark is a great futurist/theorist who writes comic books, and I’m a conceptual environment and architectural artist who draws comic books,” says Donaldson. “The space where we align is organic and we’ve made something fresh and thought provoking, bringing form to a specific time and place through the lens of technology and social struggle. The Dark explores themes of what it means to be human in an age of advanced biotech and bodyhacking. It’s a book about what it means to be a soldier when you can be wounded and healed over and over again to continue the fight for your country. And it’s a look at what it means to be American when the population has been decimated and the power grid is gone.”

“The term ‘Biopunk’ has come to refer to so-called ‘bio-hackers’ who can edit genes from their basement labs,” said Sable. “In fiction, to me this is a twist on the cyberpunk genre, only using biologically based technology instead of silicon based hardware. We believe The Dark is the first “biopunk” graphic novel.”

“The Dark is a military and espionage thriller that is very possible,” says Chip Mosher, comiXology’s Head of Content. “Readers will be stunned both visually and by the future the book envisions.”

For more updates on comiXology Originals, check out http://comixologyoriginals.com

About the Creators:
Mark Sable is a comic book writer and creator. While Mark has written such characters as Spider-Man for Marvel and Batman for DC, he’s best known for his creator-owned works including GRAVEYARD OF EMPIRES, about Marines and Taliban teaming up to fight zombies in Afghanistan, for Image Comics and UNTHINKABLE, about a think tank made up of writers trying to stop worst case terror, for Boom! Studios. Upcoming books include GODKILLERS for Aftershock Comics. Mark also works as a futurist for The Atlantic Council’s Art of Future Warfare project, where members of the military, intelligence and entertainment communities help envision the future of conflict.

Kristian Donaldson is an illustrator, comic book artist and Eisner award nominated colorist living in Dallas, TX. His clients include Nissan, Adidas, and Philippe Starck Co. Kristian’s most notable comics include SUPERMARKET from IDW and 99 DAYS from Vertigo. He is a graduate of the Savannah College of Art and Design.