It really looks like digital and print will be able to co-exist! 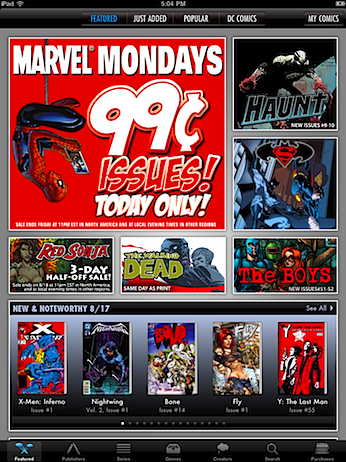 Since this seems to be digital news week, word that three out of five of the top grossing apps on the iPad are comics apps is quite notable. MediaBistro has the chart:

Looking at this list, weâ€™d guess that parents are relieved that real life stickers â€” which can be affixed by the active child to surfaces not meant for them to be affixed to â€” have been replaced by virtual stickers. But comics folks should probably be glad that Apple has surely noticed this revenue stream, and will continue to keep comics in the mix.

ComiXology also noted this milestone, and released a press release which quantified their success in Angry Bird units. Maybe here will be even more to talk about in that next Angry Bird therapy session.

ComiXology CEO David Steinberger also points out that the â€œDigital does not harm print salesâ€ axiom is still holding true. Despite the day and date release, DCâ€™s #1s are selling out all over the place.

Comixology is proud to announce today that the latest update of their digital comics App â€” Comics by comiXology â€” charted last night as the 2nd top grossing iPad App on the iTunes App Store.

Solidifying comiXology as the market leader in digital comics, the Comics App quickly charted as consumers embraced the enhancements that came with the 3.0 version launch last week. But this new version wasnâ€™t the only factor that lead the Comics App to burn up the charts â€“ the new update of Comics by comiXology hit virtually simultaneously with DC Comics debut of their comiXology exclusive same-day print and digital release of 52 brand new ongoing comic book series, dubbed DC Comics â€“ The New 52. Both the new version of the App and DC Comics â€“ The New 52 ensured the Comics by comiXologyâ€™s chart dominance.

Beating out popular apps like Zinio, Smurfâ€™s Village, The Daily and even the global hit Angry Birds, this new sales record proves that people around the world want their comics on demand and at their own convenience through the Comics by comiXology App.

â€œIâ€™m happy to say that we made Angry Birds a little angrier last night with us trouncing them in sales,â€ said David Steinberger, CEO of comiXology. â€œBut in all seriousness, when you look at our success as one of the top grossing iPad Apps and then take in the news about DC Comics going back to print on almost all of The New 52 comics, you can see that digital distribution is growing both the print and digital comic book market. DCâ€™s daring move going digital the same day as print with all their print publications this month in combination with the great buying and reading experience our App provides is a tide that lifts all boats.â€

Built from the ground up, the recent Comics 3.0 iOS update of Comics by comiXology has a sleek new user interface, new store, bolstered comic discoverability paths, and dramatically increased speed. These new features combine to create an unforgettable user experience from the opening of the app to discovering a great selection of comics that fans are sure to love â€”and all with industry record load times.

via Comics make money on the iPadÂ |Â The Beat.