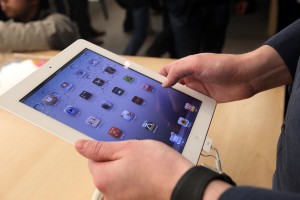 If weâ€™re going to be moving into the digital age properly, same day digital comic books must be released at 12:01am ET online.

This is not because Iâ€™m a whiner, and I need to read it naaaaow. Itâ€™s because in the short run and the long run, this would be a good thing. Again, Iâ€™m probably speaking from a position of supreme ignorance, but thereâ€™s been a bunch of news leaking out lately about how digital sales are nowhere near as strong as print sales. You could argue thatâ€™s because, essentially, digital sales have been hobbled to give preference to the brick and mortar stores (at least, supporters of digital would certainly say that). You could also say thatâ€™s because the price point is on par with print editions, something that again, favors the physical stores over the digital stores â€“ weâ€™re still of a time where, if youâ€™re going to pay full price, it feels better to physically own a copy of something.

There are advantages to digital, surely. Itâ€™s space-saving. Itâ€™s convenient. And for customers whoâ€™s stores canâ€™t afford hundreds of copies (like stores can in NYC, for the most part), or are hours away, itâ€™s a way of actually being able to buy books you wouldnâ€™t otherwise get your grubby little hands on.

However, and this is getting back to my proposal there, weâ€™re still missing the main way digital sales can and should work: as advertisement.

Hereâ€™s how it works: the people â€“ for the most part â€“ who own a digital device for reading comics, and will want to buy a comic digitally, are at least semi-tech savvy, and probably a large portion are early adopters. [NOTE: This is where weâ€™re getting into the totally non-scientific section of thisâ€¦ Because itâ€™s been so scientific so far.] Now, Iâ€™m not going to say every single one of them like shouting â€œfirst!â€ but as a human species, we really like being cool and getting to know about something before other people do. If you tell digital readers they have a chance to buy a comic book first thing on a Wednesday, they will digitally â€œline-upâ€ for the chance to read the book.

Then, those same tech savvy people will head to their favorite social media outlet, blog, or bulletin board, and brag about how, eight hours before everybody else, they read said book, and hereâ€™s what they thought about it. And you know what thatâ€™s called? Advertising. And itâ€™s not just advertising for the digital edition either; though certainly, I would imagine more people would be swayed to go digital if they knew it was â€œcool.â€

No, itâ€™s also a strong advertisement for the print copies, too. Because the news is already out there that a certain book is good â€“ assuming it is actually good, of course â€“ on Twitter, Facebook, or a comic book forum, itâ€™s going to be in customerâ€™s minds when they head to the store later that day. And thatâ€™s, you know, when you want the advertising to work. BEFORE they head to the store, not a few days later, or even a few hours later.

Look, Iâ€™m pretty lucky in what I do. I get to read advance copies of comics before they come out, I hear the buzz from authors and artists, and generally speaking, I still buy pretty much everything all the time, because I like to stay on top of whatâ€™s going on in the industry. But for most people, they head to the comic store, and pick and choose what they think might be good. As a publisher, you need to get into peopleâ€™s minds as much as possible. So why wouldnâ€™t you take every opportunity to get the buzz out about your book?

Piracy, I guess? And fears that digital sales will cannibalize print sales? I mean, sure, both those things might happen. But if you have a major movie coming out, you drive anticipation with midnight showings, so why not comics?

Hereâ€™s the thing, and this is a totally separate issue, but I wanted to further address the issue of digital and coolness: right now, thereâ€™s nothing cool about digital. It comes outâ€¦ whenever, itâ€™s pricey, and itâ€™s not always a great reading experience, as things are formatted for print. Like I said before, the price point is a whole other rant; the format isnâ€™t something that necessarily should change, but will change as companies get more comfortable with the digital format; so letâ€™s change the â€œcoming out wheneverâ€ thing.

Thereâ€™s the greater issue of whether comics in general are cool or not, but one thing that might help is getting them back to being something people â€œMUST HAVEâ€ rather than a luxury item some people are casually interested in, or buy out of an obligation.

Last little thing Iâ€™ll mention is, putting everything at 12:01am would standardize when digital comics come out. Right now, as far as I can tell, some of them are available in the early morning, some a little later, and then DCâ€™s stuff â€“ I believe â€“ is slated for 2pm. Except I only learned this because I asked around. Imagine if you went to a physical comic book store, and they only had one issue out when they opened, a few more several hours later, and the bulk of their stock later in the dayâ€¦ But they never posted their hours, and you could only find out what was going on by asking customers? Thatâ€™s not great business, I think.

Again, Iâ€™d guess that digital has been hobbled by the print/digital war, and that has to stop. A standard time would make things easier on everyone, and barring problems, of course, would mean you could head to your iPad at one time, click down the line, and buy everything. Thatâ€™s good for everyone, from customer up to the publisher. That all said, even if the midnight thing doesnâ€™t appeal to people, we still need better signage online.

To sum up a bit here, I donâ€™t think not having Midnight sales is the end of the comic book industry. In fact, weâ€™re really still at the dawn of the digital age hereâ€¦ But things move faster online, and the comic book industry has far less time than the music industry or the movie industry did to catch upâ€¦ And they had no time at all. Letâ€™s start making changes for the better as soon as we can.