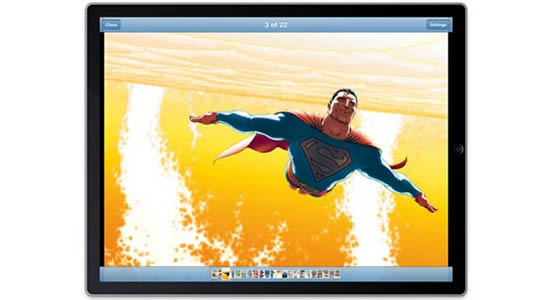 I wrote about this earlier today for Timeâ€™s Techland blog (Look at me, crossing the streams of my writing gigs), but as I was doing so, I couldnâ€™t stop thinking about the digital comics world: Multiple publishers and digital booksellers are facing a staggering seventeen class action lawsuits over the pricing of digital books, specifically something called â€œagency pricing,â€ which is essentially how digital comic prices are set.

Agency pricing is when publishers set the price of their digital releases, and that price point is used across whatever retailer sells said releases. Itâ€™s a system thatâ€™s been adopted by the big US publishing houses in response to fears that digital prices were so low that they were undercutting print prices and hurting the print retailers in doing soâ€¦ Does any of this sound familiar yet?

Whatâ€™s interesting to me is that, while the response from the digital book readers is sue the publishers and retailers for price fixing, the response from digital comic readers has been toâ€¦ what, exactly? Gripe about paying $3.99 for Ultimate Comics: Ultimates but pay it anyway? Resort to piracy? Iâ€™m not sure what this says about comic readers as a mass audience â€“ That weâ€™re mild-mannered and likely to complain, perhaps â€“ but it does make me wonder whether the results of the book publishing lawsuits could have an effect on the digital comics market and its pricing.

Of course, Iâ€™m still wondering when weâ€™re going to work out digital comic pricing in general; I tend to think that Matt Fraction might have gotten it right with his attitude towards Casanova: Avaritia, releasing the digital version two weeks after print at a reduced price â€“ $1.99 versus $4.99 in print â€“ but missing the letter column. I could be wrong, of course. Is the same price as print for a day-and-date digital book a â€œfairâ€ price? And if so, is the DC model of dropping a dollar after four weeks sensible, or has Marvel got it right by keeping things at full print price forever?

Price is likely to be the barrier to digital comics breaking through to a mainstream audience; the sooner this all gets worked out, the better. But who can really say what the correct price for a digital comic should be?