I grew up on the Beano! Excellent to see them enter the next generation! 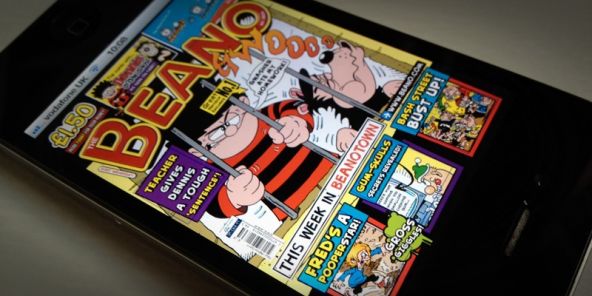 The much-loved Dandy and Beano characters can now be seen on iPad, iPhone and iPod Touch after DC Thomson launched iOS apps.

The Dundee-based publisher â€” which also publishes The Courier â€” has announced a digital subscription service for the UK’s best-loved comics through Apple’s Newsstand.

First published in 1937 and 1938 respectively, the two comic institutions join another of DC Thomson’s comic legends, Commando, in the App Store.

Even though the comics are for children of all ages, DC Thomson says the move into digital publishing underlines its commitment to children’s literacy, ensuring the famous comics can be read by kids as widely as possible on all kinds of formats.

Teachers, parents and educational experts all acknowledge the role comics have in providing the bridge between picture books and chapter books and with the increasing use of apps by children, the company hopes even more of them can now access their weekly, original and hilarious content.

Mike Stirling, editor-in-chief of The Beano, said: “The great thing about the new app on Newsstand is that it guarantees our fans can enjoy The Beano 24/7.”

Editor-in-chief of The Dandy Craig Graham added: “We’re incredibly excited about being available as a digital download. Now people can have the unique school of mock that is The Dandy at their fingertips, wherever they are and whatever they’re doing.”

The Beano and Dandy apps are free to download and come with free issues to try out. The digital comics are enhanced with interactive advertising, video and links to the existing Beano and Dandy websites â€” beano.com and dandy.com.

DC Thomson is planning to bring a range of titles to Apple’s Newsstand in the coming months.

via The Courier – Digital Dan and Dennis â€” Dandy and Beano comics hit the App Store.