You can see a monster movie anywhere. At Corman Cinemas, you see real monsters. Zombies. Wolf-men. Vampires. Bugs. Slimy…blob…things. Tearing your ticket. Making your popcorn. Sitting next to you in the theater for that “extra-added” scare. Authentic. Real.
Unfortunately, Corman Cinemas has fallen on hard times and been bought out by the Ishiro Corporation. What this means for the Corman crew and the future of the theater is anybody’s guess. Whatever it is, it can’t be good.
That’s the one thing former manager and twentysomething do-nothing Ryan Hull is sure of–corporate ownership will bring him nothing but misery. This fear is made real in the person of Lina Patel, the new manager of Corman Cinemas. She’s no-nonsense; by the book. Clearly, she has no idea what she’s doing.
How will Lina manage someone like Priscilla, the sexy vampires who seems like she’s one pay cut away from sucking on everyone’s throat? What about Wolf? With the mind of a child and the claws of a Sasquatch, he can cause more mayhem than someone like “Ms. Patel” could possibly handle.
And that’s just for starters. How is Lina going to handle Ken “Zombie” Watanabe? His hunger for brains is rivaled only his affection for Bitsy, the nihilistic, apathetic teenager who comes closest to passing for “normal” at Corman. And what about Sludge, the Living Mop? Ick. Sludge.
Who is behind the Ishiro Corporation? Why would they be interested in a rinky dink operation like Corman Cinemas in the first place? Now THAT’S the real question. 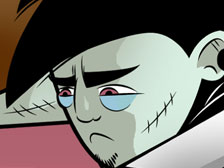 This is a scooby doo caper, with crisp clean art work, ‘safe’ (ish) monsters and an interesting dynamic.
Variations on this theme have been done before, but there is a reason why they work!
3 1/2 Stars and added to my favourites