How do we fight an enemy that is hidden among us? When anyone you know could be an alien, who can you trust? A riveting mystery that asks… can YOU tell who is an alien? Probably not, because they’re hidden real good. 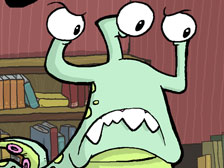 This is a fun story, with easy on the eye art and well laid out panels! The story could continue on well, but I worry that it would get old quickly and be rehashing the same jokes.