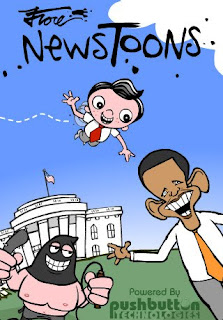 NewsToon, an app for iPhone and iTouch created by Pulitzer Prize winner Mark Fiore and featuring some of his best political cartoons, has been cleared for sale on iTunes – after previously being rejected for ridiculing public figures.

Apple CEO Steve Jobs himself reportedly called the rejection a mistake in an e-mail response to several customers.

Click here to see the rest of the article