Lyric England has taken the first steps down a blind path, but one he is convinced will lead him to answers: Answers to a fantastic question, an idea that has hold of the young genius and will not let go.
â€œWhat if the story of The Strange Case of Dr. Jekyll and Mr. Hydeâ€¦ was real?â€
To answer that question Lyric, along with his sister Melody, literally plunge into an adventure that begins on the tropical island of Upolu â€“ the last home and resting place of Jekyll and Hyde author Robert Louis Stevenson â€“ and sends them around the world to achieve Lyricâ€™s secret agenda.
Less than an hour after arriving in paradise, Ric and Mel are bloodied in battle and meet the opposing sides of a hundred-year feud; one that has the Jekyll and Hyde story at its heart. Lyric begins to find answers, but each lead to more questions. He and his companions uncover the truth piece by piece, leading to a new, frightening understanding of science and reality itself. Lyric becomes mired in a dangerous world of secret societies, shameful history and creatures that are more monsters than men…
â€¦creatures that are themselves mere shadows of the only truly evil man to walk the Earth. 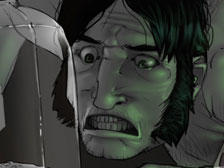 Third review in and already, its a struggle. The competition is already heating up! This is another strong entry with a really nice idea. Initially I thought it would be quite bland, but the 8 pages soon stopped that.
The art is fine and crisp, which is a rich contrast to the art for the flashbacks which is dark and forboding. I can see I’m going to have a hard time choosing a favourite!
4 Stars & added to my favourites!