Downthetubes.net have a profile of Valentine creator Alex de Campi – creator of the graphic novel ‘Valentine’ which has been translated into 14 languages and is available on iPhone, iPad, Android, Kindle, e-reader and online! 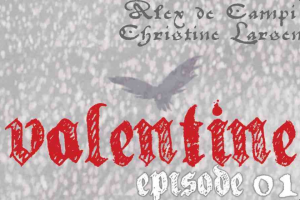 Film maker and Eisner-nominated comic book writer Alex has been working hard to ensure this comic is available on a variety of digital platforms (and different languages) including iPhone, Android and iPad – and a print edition is also in the works.

Valentine tells the tale of a cavalry lieutenant, lost and dying in a snowstorm during Napoleonâ€™s 1812 retreat from Russia, who stumbles across an ancient conflict between beings more powerful than humanity can imagine, a conflict which now threatens to consume the Earth and all upon it â€“ because those who have stood in the horrorâ€™s path, the few bastions of light, are going home.