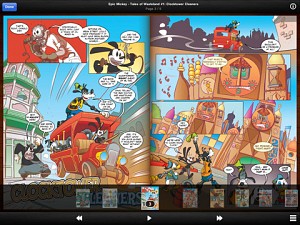 The Peter David written Disney Digicomics are now available for iPhone & iPad – although not in the UK, so I can’t give any comments on what they are like.

If there is anyone in the US who has these and read them, please mail me

It includes one digicomic for free, and another five that can be downloaded as a bundle for an in-app payment of $2.99 – for now, the app appears to be only available in the US App Store.

Besides offering the comics, the app also has a section to introduce the characters, as well as a map of the Wasteland world, and a trailer for the main videogame. Disney is promising further updates with more content in the weeks to come.

And from Peter David himself:

For those who have iPads, iPhones, and similar i-Products, the app for the â€œEpic Mickeyâ€ digicomicsâ€“written by yours trulyâ€“have gone live. The comics are set before the events detailed in the upcoming â€œEpic Mickeyâ€ video game, depicting the world of Wasteland (populated by forgotten Disney characters) before the great Thinner Disaster that lays the groundwork for the game.

My personal favorite is â€œThe Rubbish Cup,â€ which is basically a love letter to the late, lamented Adventurers Club. Check it out.