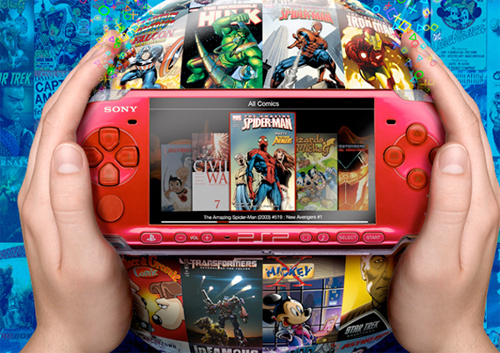 PSP Comics have released a new batch of digital comics…

First off, a brand new Transformers series,Â Transformers: Drift, starts with issue #1. This four-part mini-series chronicles Driftâ€™s origins as the Decepticon Dreadlock (!) and how he became an Autobot. In this first part Drift attempts to uncover the secret behind his mysterious rescuersâ€¦ with shocking results!

We also have moreÂ Y: The Last Man in store for you with issue #9 out this week. Yorick finally uncovers the dark secrets his hosts have been hiding, and heâ€™s also unexpectedly reunited with someone from his pastâ€¦ Iâ€™m not telling you who!

DCâ€™s brilliant seriesÂ Sandman also continues with issues #4 and #5. Morpheus travels to Hell and then has a pretty tumultuous encounter with Dr. Destiny, who has his eye on something that doesnâ€™t belong to himâ€¦ Guest-starring Mister Miracle and Martian Manhunter!

And for Batman fans we have three nice additions this week:Â Batman #676 and #677, starting the â€œBatman: R.I.P.â€ story arcâ€¦ Another pretty epic storyline as you can guess!Â Superman/Batman is also back with issue #32, part 5 of â€œThe Enemies Among Usâ€ â€“ where a crazed Superman goes against a super-powered Batman.

Also in this week is a brand new series from Markosia,Â Hero 9 to 5. This very fresh take on superheroes is set in a world where being one is just a job, and where the rich can afford the best heroes and the poor get the government sponsored agencyâ€¦ â€œHeroes for Zerosâ€! On their payroll is Jacob Reilly, a regular guy who just happens to be able to shoot flames from his hands, and whose girlfriend is also his alter-egoâ€™s nemesis! All four issues available now.

And finally, Disney are bringing a very nice adaptation of the animated movieÂ Up to the store. To escape a life in a retirement home, budding great explorer Carl rigs his house into a hot-air balloon, and steals awayâ€¦ with an unexpected stowaway on board! Fantastic story which is worth a read.