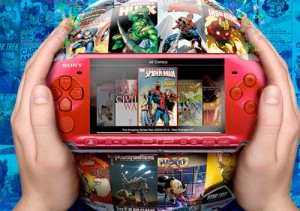 PSP Comics have released their latest comics available for this week with some special spotlights of the Iron variety – namely Iron Man and War Machine:

Marvelâ€™s Iron Man: The Inevitable (2005) starts this week with issues #1 to #5. In this mini-series, concluding next week, Iron Manâ€™s long-time enemies come back to haunt himâ€¦ Including classics villains the Living Laser and the Spymaster to name but a few!
And thereâ€™s more Iron Man-related goodness with War Machine (2008). James Rupert Rhodes is an ex-Marine who befriended the legendary Tony Stark and became his personal pilotâ€¦ before blasting into his own ongoing series! This 2008 incarnation by Greg Pak and Leonardo Mancowith comes with a surprisingly familiar supporting cast and one of the biggest villains in the Marvel Universe!
If you still havenâ€™t got your fill of heavy-armoured heroes, check out IDWâ€™s Transformers: Sector 7 #1. The secret history of the Transformers is finally revealed, through the multi generational saga of the clandestine spy group code named SECTOR 7â€¦ Fans of the Transformers movies will also be happy to know that this comic links directly to a few familiar storylines.
And to keep the Halloween spirit alive, we bring you an adaptation of Robert Rodriguezâ€™s upcoming grindhouse flick Machete. In issue #0 Rodriguez himself, alongside producer Aaron Kaufman, pens the ultimate â€œMexploitationâ€ tale of revenge as we see what drew Machete to first pick up the bladesâ€¦ Not for the faint-hearted.
And we also have more Dragon Age, Batman, Wonder Woman, Y: The Last Man, and many many othersâ€¦