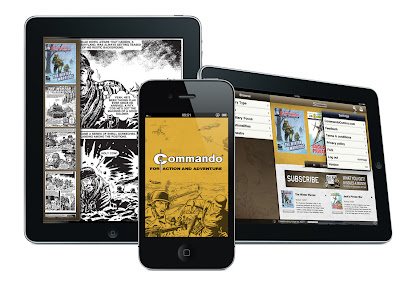 Along with the latest issues ofÂ Commando â€“ which includes a reprint of an issue from 1970 drawn by now topÂ 2000AD artist Cam Kennedy – comes news from DC Thomson that their digital editions of the war edition comic are now available for iPhone and iPad. Check out the information on this development below, after we give you the rundown on the new print editions.

Thereâ€™s much more to come from Britainâ€™s only surviving war/action adventure comic in its Golden Jubilee year with a full programme planned to mark the title’s 50th anniversary. Favourite characters are due to make returns alongside new heroes specially created for the anniversary year along with delving deep intoÂ Commando‘s past to dust off classic stories like â€œWalk or Dieâ€ that haven’t seen the light of day for many years.

With subscriptions up 15 per cent over the past year, helped no doubt by editor Calum Laird and his team’s determination to get the message out about the comic, Commando is one war veteran that isnâ€™t done fighting yet.

For more information at Down The Tubes click here

â€¢ TheÂ iPad andÂ iPhone apps are free to download through the Apple iTunes App Store and a digital subscription is priced at Â£4.99 per month, compared to a Â£99 annual print subscription. For those not sure there are 4 free issues to download prior to making a purchase.