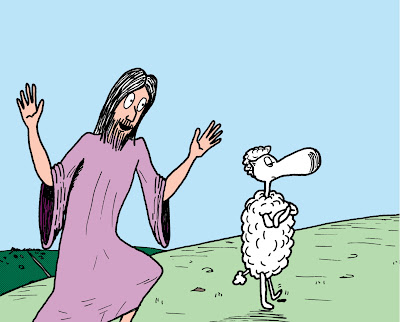 Rich Diesslin is the creator ofÂ The Mobile Gospel, one of ROK Comics first ‘Creator Comic Apps’), published in partnership with an individual comic creator.

The project is based on the book of Luke from hisÂ Cartoon Gospel Series (Matthew, Mark, Luke and John). He is also the creator of theÂ KNOTS or Not scouting cartoons and a general single-panel cartoon calledÂ Out to Lunch. He is also the author and cartoonist ofÂ The Cartoon Ten Commandments and the cartoonist ofÂ A Journey Through Christian Theology, an anthology of theologians now in its second edition published by Fortress Press.

ROK Comics: Where/when did you get your first comics break?

Rich Diesslin: In 1990 my first book,Â The Cartoon Gospel, was published by a small
press. I put a partial manuscript together in 1986 and sent it out to all the Christian publishers I could find. A few expressed some interest and one came back with an offer to
publish it.

Rich Diesslin: I’ve had several books published and I’m just now starting to get more active networking with other creators.

Quite a lot of my cartoons are available on merchandise now (t-shirts, mugs, etc.), which is helping to provide some steady income.

ROK Comics: How did you discover ROK Comics?

Rich Diesslin: I believe my first contact was a message sent to me onMySpace from John Freeman. That took me to the company web site and I thought that it sounded like a really good idea.

I started uploading general, scout and gospel cartoons and was very pleased to be a finalist in their big competition back in 2008. I do single-panel cartoons but with guidance from John I was able to turn many into a serialized comics, including what he later dubbed” The Mobile Gospel”.

Rich Diesslin: As a creator, I view all avenues of publication and good. They all have strengths and weaknesses, but overall it is just a way to deliver a visual laugh. I like digital comics, even though I still prefer to read things on paper, I believe I’m heading more and more digital as time goes on.

I create in Photoshop, so the digital part doesn’t bother me at all and I can quickly convert my cartoons to just about any medium. ROK seems like an opportunity to see what the mobile device media will bring, and I was pleased to that theÂ Mobile Gospel was selected as one of the lead-off iphone apps for ROK.

ROK continues to be on what I call “the bleeding edge” of digital comics delivery. Their original concept was good, and with the popularity of mobile, they should be able to smoothly transition over and stay a leader in the field.

Rich Diesslin: Studies have shown an increase in the percentage of ebook sales vs. printed books, suggesting that it is increasingly replacing print media. I have no doubt that ebooks and apps are also reaching new audiences as well.

Recently I was pleased to find out that a 4-year-old girl (and her mom) were enjoying theÂ Mobile Gospel. While my cartoons are mostly intended for youth and adults, the daughter really liked any book with cartoons and her mom finds it a good way to cover to bible lessons.

I think there will continue to be a role for print media, but a lot will change in the market place as we find out just what that role will be (also known as at what point the market share will level out). Right now, the trend is toward digital and the risks and costs associated with digital are much more conducive to publishing than tradition forms.

Rich Diesslin:Â  I should be releasing a new work this winter cartooning the Old Testament.

I haven’t decided the best form for it, but I’m thinking my web site and an ebook might be the way to go.

Otherwise,Â  I continue to work onÂ Out to Lunch andÂ KNOTS or Not scouting cartoons.

Rich Diesslin: Other than my own (www.the-cartoonist.com), I findÂ The Daily Cartoonist blog is very good for keeping up with cartooning in the United States. Also, several papers in the US allow you to view comics online, and theÂ Houston Chronicle even allows you to build your own link by selecting from several comics.

ROK Comics:Â  Whose work do you most admire in the comics field and why?

ROK Comics:Â  What advice would you offer to new cartoonists?

Rich Diesslin:Â  Love what you do, do what you love, but don’t give up your day job (unless you can)!