Madd Science creator Steve English was inspired to draw cartoons by copying Walt Disney characters at the age of 5 or 6. Reading comics for himself at an older age inspired him to produce his own simply for fun, and that remained a hobby for many years.

“Although I eventually went on to do A level art I decided to study history and archaeology at university in the late 1980’s and early 90’s where I produced cartoons for the history society there,” he says.

“After graduating I worked for a Christian student organisation, and after that as a church youth worker. However, a friend from university remembered my cartoons and asked me to illustrate a guide to theology. It was my experiences from that that made me want to become a full time cartoonist and I have been freelance for just over ten years.”

ROK Comics: Where/when did you get your first comics break?

Steve English: I supposeÂ The Potted Guide to Theology and the following book,Peter’s Cat (which was completely cartoon strips) could be considered to be the break that inspired me to become a freelance cartoonist. But it’s hard work just trying to find the next cartooning job and I’m always looking out for the next break.

Steve: A few years back I did quite a lot of work forÂ The Horrible Science CollectionandÂ Scooby-Doo World of Mystery, and I did a couple of spreads forÂ The Horrible Histories Collection. Currently I have a football cartoon that appears in theÂ Non-League Paper and I also do work for the Salvation Army in their children’s magazineÂ Kids Alive!.

Steve: I am very proud of my current cartoon,Â Football Earth, which appears in four different publications across two continents. Also winning the 2007 ROK Comics humour competition withÂ Madd Science was a definite highlight. It was great to be recognised like that.

ROK Comics: How did you discover Rok Comics?

Steve: I really can’t remember now – it was possibly through a link found onDown the Tubes. Either way I just stumbled on it one day while surfing the net, and I thought it would be an ideal way of promotingÂ Madd Science.

Steve: There is something very tangible about holding a printed comic and for me that is hard to beat. But because of the cost, print media and the distribution of it is mostly in the hands of a select few. Digital technology has put comic production into the hands of potentially anyone, at very little cost, and with the rise of portable computers reading a digital comic is going to feel more and more like having a printed comic. This will certainly lead to a lot more expression and creativity. The question is whether or not cartoonists will be able to make a living from it. I guess only time will tell.

Steve: I’m sure they must be reaching new audiences, but the great thing about traditional comics is their collectability. So hopefully the market for printed comics will also be expanded by the demand for collecting what is seen on screen. 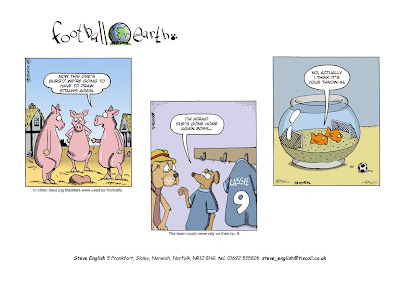 Steve: As I mentioned before, I currently draw a cartoon panel calledÂ Football Earth, about how animals play football, which features weekly inÂ The Non-League Paper. It also had a short run in theÂ BeanoMAX last year, and appears in a couple of soccer magazines in America. I am constantly trying to get more publishers interested in it and have recently submitted it to the Sports Journalists’ Association to be judged for sports cartoon of the year.

In 2009 I produced my own comic,Â The Dead Sea Comic, which sadly only had a brief run. However I have another publisher interested and I am hoping to resurrect the project later this year.

Steve: I would have to sayÂ Down the Tubes for the simple reason of keeping up to date with news about British comics and potential future work. There has been the odd occasion when I have missed something important so I have now made it my home page.

Steve: I subscribe to the newÂ Dandy for my daughter, but of course I enjoy it too! I regularly plague the editorial team with submissions but so far they have turned me down. I see myself as mostly as a strip cartoonist (the newspaper type) so for inspiration I subscribe to Comics.com. They send me a whole load of newspaper strips by email every day for free.

ROK Comics: Whose work do you most admire in the comics field and why?

Steve: I really admire newspaper cartoonists who can produce something funny and interesting every day of the year. Not surprisingly the really good ones burn out. So it is sad when you have to talk about the likes of Bill Watterson (Calvin and Hobbes) and Gary Larson (The Far Side) in the past tense. Those guys have probably influenced me more than any other cartoonist. They were consistently funny and full of surprises.

ROK Comics: What advice would you offer to new cartoonists?

Steve: Get a good computer and know how to use the internet. Get used to receiving lots of rejection letters and just be determined to succeed.