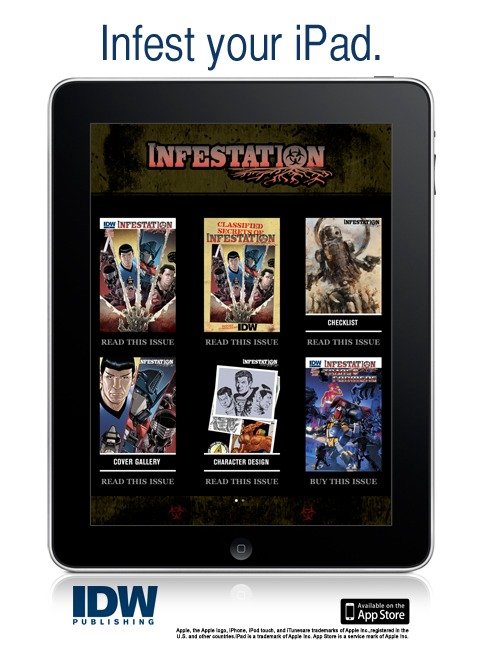 San Diego, CA (March 14, 2011) – IDW Publishing is pleased to announce the release of INFESTATION comics to Apple iOS users. Available as both a stand-alone app and within the IDW Comics storefront, readers can now enjoy the entire INFESTATION crossover event on their iPad, iPhone or iPod touch.

INFESTATION is the hit comic series that infects the TRANSFORMERS, G.I. JOE, Ghostbusters, and Star Trek universes with legions of undead. This dimension-spanning storyline begins with a specially priced 40-page story by writers Dan Abnett and Andy Lanning (The Thanos Imperative), and artist David Messina (True Blood). Something goes horribly awry in IDW’s Zombies vs Robots universe, threatening to tear some of pop culture’s biggest realities asunder. This unparalleled, never-before-seen event is now available digitally through the Apple App Store.

The INFESTATION Comics app is made for the iPad, iPhone and iPod touch. Readers can view full size pages, or read panel-by-panel simply by turning the iPhone or iPod touch horizontally.

“We’re excited to bring out INFESTATION as a stand-alone comics app,” stated Jeff Webber, IDW’s director of ePublishing. “While all of the issues are also available in our IDW Comics app for our regular readers, creating a stand-alone INFESTATION Comics app allows us to introduce the whole event to fans of the individual brands. This way, casual readers of TRANSFORMERS, Star Trek, G.I. JOE and Ghostbusters digital comics can see what this big comics cross-over event is all about!”

IDW’s INFESTATION app includes free digital-only versions of the preview edition, an issue checklist, a cover gallery and character designs. Readers will also be able to get the 40-page kick-off story, INFESTATION #1, for only $0.99. New issues of the series will be added over the course of March and April, culminating in the grande finale and a special TOP SECRET digital-only cross over.
“This will be one huge surprise for comic fans everywhere,” added Webber. “All we can say right now is, bring a life vest!”

Visit IDWPublishing.com to learn more about the company and its top-selling books.

About IDW Publishing
IDW is an award-winning publisher of comic books, graphic novels and trade paperbacks, based in San Diego, California. Renowned for its diverse catalog of licensed and independent titles, IDW publishes some of the most successful and popular titles in the industry, including: Hasbro’s The Transformers and G.I. JOE, Paramount’s Star Trek; HBO’s True Blood; the BBC’s DOCTOR WHO; and comics and trade collections based on novels by worldwide bestselling author, James Patterson. IDW is also home to the Library of American Comics imprint, which publishes classic comic reprints; Yoe! Books, a partnership with Yoe! Studios; and is the print publisher for EA Comics and ComicMix.
IDW’s original horror series, 30 Days of Night, was launched as a major motion picture in October 2007 by Sony Pictures and was the #1 film in its first week of release. More information about the company can be found at IDWPublishing.com.