From Boom! Studios and Comixology there is the 28 days later comic series for half price for the next two days! 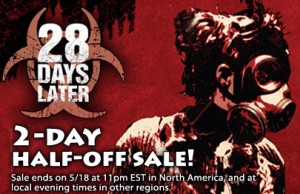 The series follows on from the events ofÂ 28 Days Later, initially taking place in the gap between it and the sequel,Â 28 Weeks Later, much like the graphic novelÂ 28 Days Later: The Aftermath, and as such references the upcoming AmericanÂ NATO occupation. Issue 22 directly references events from the second movie, and takes place in the same time frame.

Click the image for more on the 21 issues available!