Thanks to Warren Ellis for the link 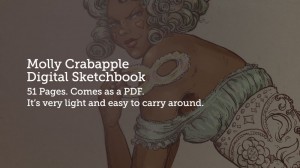 Mollyâ€™s work reminds us of the dream we had after drinking large amounts of mushroom-infused tea, falling down some steep European stairs and winding up in an Amsterdam hospital. Anthropomorphized pigs in bowler hats, Dorian Gray, half-naked women, Victorian carnival performers, suave Octopi